Yesterday's deal to save ARENA and stop the cuts to welfare proves a simple point: Parliament responds to public pressure.

When we first raised the issue of the proposed cuts, many commentators said privately and publicly that we were whistling in the wind; that this proposal would pass the parliament as Labor had indicated support during the campaign.

But thanks to your support and action we have been able to help turn this all around. Yesterday's deal between Labor and the government, while not perfect, removes this unfair and economically unsound cut. And while the government has now said they will still call on the Senate crossbench to pass these regressive cuts, we have already made sure our research is in their hands.

There was significant movement on ARENA, which has survived another 'near death experience'. The Renewable Energy Agency will retain $800 million in funding. This is the first time, since its inception in 2011, that ARENA has ever had bi-partisan support for its very existence.

Newstart Cuts: the unmaking of a 'done deal'

As the election result eventually gave the Coalition a slim majority in the house, the new government put a savings bill at the front of their agenda. The biggest figure in the bill was cutting $1.4 billion from the incomes of the very poorest in our community. These cuts were expected to sail through the Parliament with Labor's support, given that the opposition had 'banked' the savings in their election economic plan.

Yesterday brought news that Labor had put their foot down, refused to pass the bill if it contained the cuts to Newstart, and negotiated a deal to find alternative savings.

What happened between mid-August and mid-September to bring about this political upset? Public pressure - from all corners, on all sides of politics.

Congratulations to the over 7700 of you who added your name to our Open Letter to the Prime Minister opposing the cuts! Other signatories included John Hewson, Miles Franklin winning author Anna Funder, Cheryl Kernot, ACTU President Ged Kearney, and Marcus Westbury just to name a few.

When we first sounded the alarm, we presented research showed that the proposed cuts would send Newstart to a record 32% below the poverty line. We continued to keep the pressure on with research showing that the cuts were selective and unpopular would increase inequality in Australia. Voices grew louder, from welfare groups and senior figures in the Labor party.

Our research on inequality will continue, as this deal shows that both sides were convinced that attacking the least well off is a politically and economical flawed approach to 'budget repair'.

We are also pleased that ARENA has survived the latest attack on its funding. Our recent report, Leaving the ARENA, shows that for 29 of the last 30 years fossil fuels received most of Australia's energy R&D funding. But for one glorious year, ARENA made us a renewables world leader. Abolishing ARENA’s grant funding will send Australia back towards the bottom of the international pack in terms of renewable energy funding.

ARENA has been under attack from day one. Slated for abolition, it was rescued by The Greens and Labor in the Senate, and the Clive Palmer deal negotiated in 2014. But with the deal announced yesterday, two-thirds of its funding has been retained in a bi-partisan deal. The task now is to push for restoration of the agency's full funding so that Australia can again lead the world in renewable energy innovation. 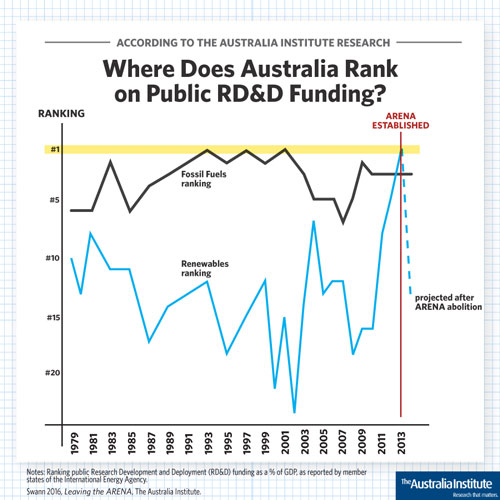 With the level of econobabble in the public discourse at an all time high, we are sending our chief economist Richard Denniss on a tour around Australia to run his Economics for Progressive Advocacy masterclass. Our Brisbane, Sydney and Hobart classes have all sold out, but with more capital cities on the way, register your interest here to make sure you are the first to know when Richard comes to a city near you.


The Australia Institute in the Media

The Saturday Paper - Inside the split at the Climate Change Authority


P.S. In Sydney, Hobart or Canberra? Richard has events coming up near you!